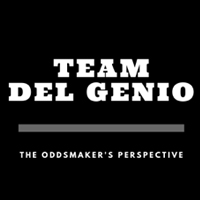 Founded by Bally Casino’s former sportsbook director, Team Del Genio provides winners from an oddsmaker’s perspective.
Active Since: 1999
Location: Las Vegas, NV
Team Del Genio continues the sports handicapping legacy of former oddsmaker, Lenny Del Genio.  After heading the sportsbook operations at the Frontier and then Bally’s, Lenny moved to the other side of the window when he started his sports handicapping service where he later mentored the next generation of handicappers.  By maintaining the perspective of the oddsmakers, Team Del Genio represents a consensus service of a small group of handicappers that Lenny personally trained.
Lenny Del Genio was one of Las Vegas’ most influential and iconic Race and Sports Book Directors from the mid-1980s through the mid-1990s.  Lenny headed the sportsbook operations at the Frontier and Bally’s during that time.  During those years, Lenny also made frequent on-camera appearances for ABC, CBS, Fox, NBC, and most cable television networks where he commented on major sporting events and gaming trends.  Lenny became internationally known as the unofficial oddsmaker of the Academy Awards and the Emmy Awards with the Del Genio line carried by both the Associated Press and Reuters.  Lenny was featured on many national and international news and entertainment programs, including Entertainment Tonight, Good Morning America, The Today Show, and NBC Late Night.  Lenny later held the position of Vice President/General Manager at Bally’s in charge of casino development while serving as a consultant to Indian gaming.  He then moved on to become the General Manager of Racing Services de Mexico, with special responsibilities in international expansion.  Finally, Lenny moved to the other side of the window in the late 1990s when he started his sports service.  Lenny was an integral part of the gaming industry for more than three decades before passing away in September 2012.
Team Del Genio was founded by Lenny to provide the best sports wagering information to gambling clients with a keen eye kept on the perspective he gained from his decades of work as an oddsmaker.  Lenny trained and mentored a small group of individuals who served as his right-hand men over the years.  It is this group of handicappers that now maintain Lenny’s legacy with their consensus Team Del Genio picks.  Besides their prestigious Game of the Month/Year plays, the Team offers packages such as their Vegas J*A*C*K*P*O*T, Oddsmaker Error, and their rare 30* Vegas Icon Signature Play which celebrates the decades-long legacy of Lenny Del Genio.  Team Del Genio's reports are available exclusively at Big Al’s Sports Picks.

With the Spanish La Liga concluding their 2019-20 campaign and the English Premier in their final week of play, the attention of the soccer world begins to turn to the resumption of the European Champions League in August. The opening round of sixteen elimination stage was in-progress when COVID-19 stopped sports in its tracks in March. PSG, Real Madrid, Atalanta, and RB Leipzig had already completed the two-legs of the matches to advance to the quarterfinals but the final four matches still have second-legs to complete. UEFA has decided that these second legs will take place at the empty home stadiums of the teams that were on the road for the opening leg. The quarterfinals, semifinals, and finals will then take place in a single-elimination knockout tournament on a neutral field in Lisbon, Portugal with all matches taking place as stand-alone daily events at 3 PM ET. CBS Sports Network owns the broadcasting rights in the United States.The competition returns on August 7th with two matches. Lyon travels to Juventus with the french team holding a 1-0 aggregate score lead over the Italian powers. Real Madrid also travels to Manchester City for the second-leg of their match which the newly crowned La Liga champions trailing by a 2-1 score to the recently dethroned two-time English Premier League champions. On August 8th, Chelsea travels to Bayern Munich in a big hole trailing by a 3-0 aggregate score to the Bundesliga champion. Napoli also travels to Barcelona with that aggregate score deadlocked at 1-1. If the aggregate scores after two matches are tied, the first tie-breaker is determined by which team scored the most goals on the road. The quarterfinals begin on Wednesday, August 12th with La Ligue powerhouse Paris-Saint-Germain facing a red hot Atalanta team from the Italian Serie A. The next day, the Bundesliga runner-ups in RB Leipzig will face the third-place team out of La Liga in Atletico Madrid. On Friday, the winner of the Barcelona/Napoli showdown will face the team that advances between Bayern Munich and Chelsea. Then on Saturday, August 15th, the survivor of Manchester City/Real Madrid will face the winner of Lyon/Juventus. The first semifinal match will take place on Tuesday, August 18th between the winners of the Wednesday/Thursday matches. The winners of the Friday/Saturday games will play the next day. Those two winners will precede to play for the UEFA Champions League championship on Sunday, August 23rd in the final match in Lisbon. With the reigning UEFA Champions League title-holder in Liverpool already eliminated from this competition, Europe will crown a new champion on this day.