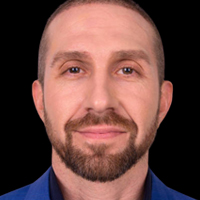 A former high school basketball coach (and the son of a bookmaker), Monty Hale has a unique skill set to analyze games, and produce winners.

It is said that the apple does not fall far from the tree.  And Monty Hale is surely evidence of that.  Monty grew up in Missouri -- in a basketball and bookmaking family -- and was a talented high school hoops player.  Monty never wanted to follow in his father's bookmaking footsteps, so he got a master's in education, and became a teacher.  And, with basketball being his first love, he also worked as a high school basketball coach.  Still, gambling was in his blood, so Monty had a knack for sports handicapping.  And he was very successful making bets for his own account from 2015 to 2021.  Then, in 2021, Monty decided to take a leap, and contacted Al McMordie about joining the roster.  Al needed more than just Monty's word (to borrow a Missouri phrase, Al said, "Show Me").  So, Monty auditioned along with 11 other hopefuls.  Over the 2021-22 season, Monty was impressive, and stood out from among the rest, by producing a profit in both football and basketball.  In March 2022, Al McMordie offered Monty a permanent spot on the team of handicappers here, at BigAl.com.  Don't miss any of Monty's winners, including his famous "Show Me the Money" plays, and his signature Killer Whale selections.